The Swiss textile industry last week sounded what has become a regular call for help from exporters and industrial sectors: the Swiss Franc is over-valued, they said, and companies are hurting.  Just in November the Eschler textile firm threatened to shutter its Swiss production sites in Thurgau and Appenzell, because of foreign competition and a debilitating Swiss Franc.  WRS’s Tony Ganzer takes us inside one Swiss textile company, to see whether industry nerves are as tightly wound as its products.
—

Though other Swiss industries often get more attention, like those for watches or precision tools, textile companies have also long been making a mark..

Martin Kägi walks toward a room filled with bales of California cotton in Sennhof, near Winterthur.  Kägi is CEO of Hermann Bühler, a fine yarn spinning mill.  10 or 12 tons of yarn roll out of this factory a day, with the process beginning with complex machines sorting and cleaning the cotton.

KÄGI: “Basically it has optical sensors which look at the cotton tufts, so that it can detect fibers with different color, visual color, but also fibers from different material.”

“There are not many, very many, people operating our machines. This is an important reason why we still can exist here in Switzerland, running a spinning mill, because it is not very labor intensive.  If it would, it would be much more difficult.”

Kägi says the textile business has faced a double-threat in recent years, forcing it to rethink itself.  The first threat came from mass-producers of textiles mostly in Asia, churning out products much faster and much cheaper, making the Swiss look for a niche.

KÄGI: “We try, of course, to, to specialize; to produce more unique yarns which are hard to copy, for which we can demand a somewhat higher yarn price.”

Another challenge hitting Swiss spinning mills, clothing makers, weavers is the strength of the Swiss Franc, primarily related to the Euro and the US dollar. Thomas Schweizer is director of the Swiss Textile Federation.

SCHWEIZER: “This is a problem for most of our companies, because from the exports we have 75% or 80% are going to Europe.  If they only were 20% going to Europe, the problem would be smaller.”

KÄGI: “We see that we spin a yarn directly from a sliver; and spin a yarn that is bound on a spool that we can directly sell to our customers.”

Kägi there refers to a sliver of cotton, which is like a fine yet fluffy string about to be spun.  This spinning mill benefits from having a subsidiary in the US state of Georgia, operating with 150 employees working in Dollars.  And many Swiss companies have foreign operations, but administration and still some production costs are figured in Swiss francs, keeping the pressure on. 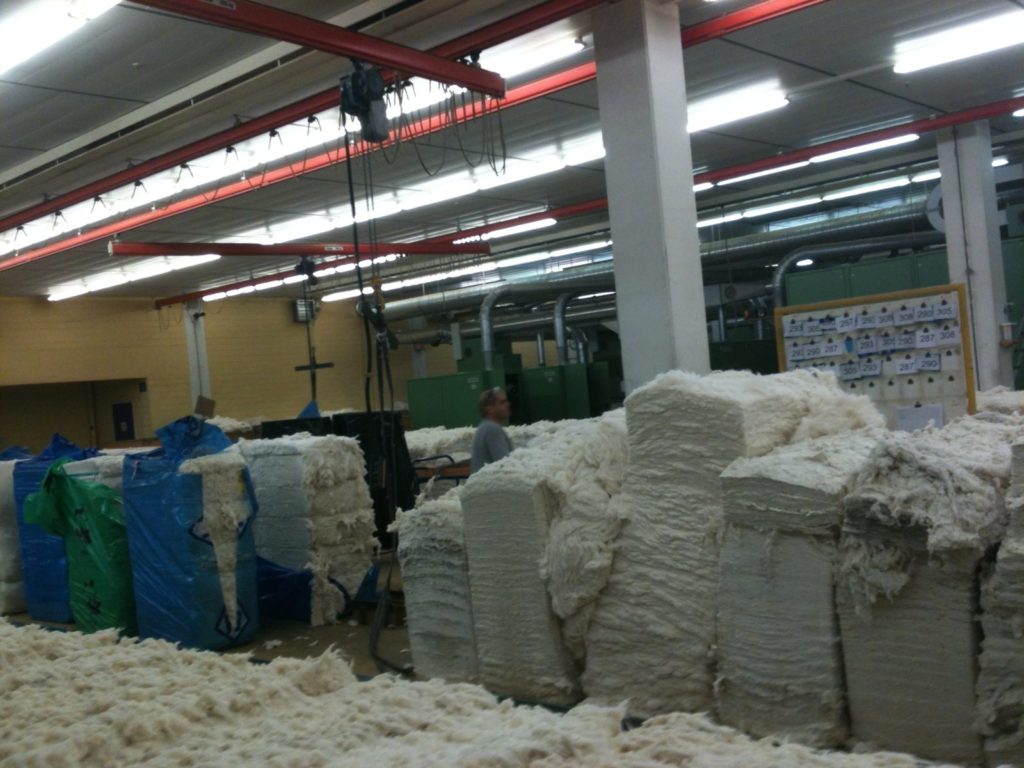 Federal statistics have shown a steady decline in export and order numbers.  In the first 9 months of 2011 textile exports dropped 4 percent.  And CEO Kägi says that hurts to the tune of 10%:

KÄGI: “10% is a lot in the yarn business, because the yarn business is a volume business to a certain extent.  And we typically have relatively small margins, and if the currency makes us 10% more expensive that eats away lots of our margins.  So we are strongly affected.”

KÄGI in turbine room: “What we see here is a diesel motor…”

With such tight margins, textile federation chief Schweizer says companies are looking for money where they can. This spinning mill has its own turbine and generator held over from its 19th century beginnings.  New Swiss laws on selling energy from sustainable sources back to the main power grid means some cash can be earned by use of this…

…the River Toss, just outside the mill.  But the fate of companies like this, and their employees, don’t depend on a little extra money, and more on how the story of global sentiment and currency markets unravels.