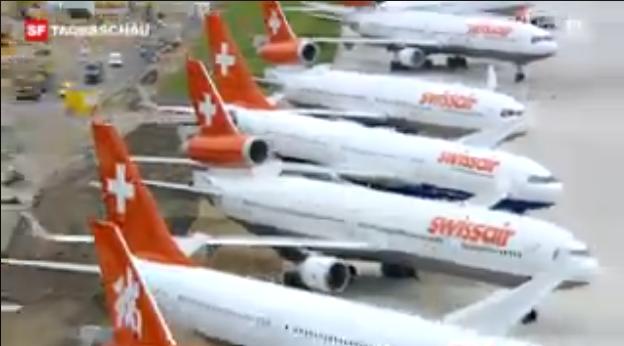 On October 2, 2001 a symbol of Swiss stability screeched to a halt.  National airline Swissair had finally run out of money, after an aggressive acquisition strategy and effects of the September 11th attacks worsened the company’s financial situation. Then company boss Mario Corti could not secure a bail-out from the government. Swiss banks had agreed to put up money for parts of the S-Air Group…just not the flight operations.  WRS’s Tony Ganzer looks back at the end of Swissair, and a national icon.

Bernd Maresch was in an office working as usual when he got the news Swissair planes were grounded.

MARESCH: “I guess everyone remembers, similar to the 9-11 story, where he was, and what he was doing.”

Maresch worked in marketing for Swisscargo, one of the four sub-units of the S-Air Group which also included Swissair.

MARESCH:  “Everyone heard and read for months and weeks that the company was not in a healthy situation, and everyone was also reading about all the companies that had been acquired months and years before, and was always wondering where all the millions came from, but we were believing in our management at the time.”

Swissair’s financial problems had been building for months, if not longer, by 2001. When voters in the early 90s said no to joining the European Economic Area, the airline fretted it would be shut out of the market.  It considered alliances with other airlines, or merging with British Airways.  Management finally sided with the Hunter strategy.

LAMBELET: “That was a very risky strategy, and I remember telling my students at the time, that I hope those Swissair people knew what they are doing.”

Jean-Christian Lambelet is a professor emeritus in economics at the University of Lausanne.  He says the hunter strategy consisted of snapping up small European carriers for the market access they would allow.  But the growth was too fast, and money was tight.

LAMBELET:  “Eventually it came to the point where there was not enough money to pay fuel bills, for example. So pilots needed to leave with bundles of bank notes.”

LÜCHINGER: “In the judgment of today you can say that was a fault.”

Rene Lüchinger is author of “The Fall of Swissair.”

LÜCHINGER: “Very important is to know that the Hunter strategy had at the beginning overall investment of about Sfr 300mn, for Swissair no problem to pay that. What happened later on is they invested about 2 billion Swiss Francs, that was a problem.”

The airline was hemorrhaging money. Company boss Mario Corti appealed to politicians, and banks to no avail.  And the effect of the September 11th attacks squeezed Swissair to its limit.  Emergency meetings were held, but the numbers were too grim.  Swissair had to be dissolved, and its business would be rolled to the smaller carrier Crossair.  The specifics of funding flight operations for Swissair were never clarified.  Flights were halted.

“Dear passengers, because of finance problems we cannot carry out our flights.”

LAMBELET:  “That the company should go under, okay..that can happen to any corporation.  But the grounding was a terrible mistake because of image problems, it turned out to be not that lasting, but still that could have been avoided.”

The Federal Council agreed to fund flight operations temporarily but the damage was done.  Swissair employees and supporters took to the streets in protest.  Thomas Steffen was a newly minted pilot at the time.

STEFFEN: “Even nowadays when I see the pictures of all the planes parked at the airport in Zurich, it still makes me freeze.”

Steffen says he had long wanted to be a pilot for Swissair, but the grounding and fall of Swissair changed things.

STEFFEN:  “I guess it’s reputation thing. Every child wanted to become a Swissair pilot 30 years ago.  Now they just want to work for a bank or somewhere else.”

Swissair was said to be home for Swiss abroad—like being in Switzerland before touching the ground.  And author Rene Lüchinger says it had a strong connection to the Swiss people.

LÜCHINGER: “Switzerland is the only country in Europe of its size that had a global, technically perfect airline, and that this airline goes bankrupt that is like a vision of something that held this country together has died.”

Lüchinger says it is a perfect company, a Swiss company, but boarding a plane feels like…boarding a nice plane, and not like being home.  The new feeling is just not the same.