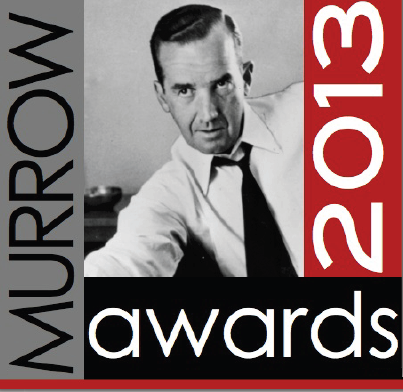 I am proud to report my current employer, World Radio Switzerland, was awarded five regional Edward R. Murrow awards from the Radio Television Digital News Association in the U.S.!  The awards are some of the most prized in broadcast journalism.

World Radio Switzerland won in the international category, Region 14, for a small market station.  “Small market” is defined (under one description I found) as one serving an audience of fewer than 1.4 million people.  WRS’s main market is Geneva, served by FM, and has about 190,000 residents.  It has listeners elsewhere in the country through web streaming, and digital radio (which is supposed to replace FM at some point.)

Most of the awards were for my feature work, including a series from Cairo and special reporting on Swiss banks and transparency.  I am proud and honored to have brought these awards to the station, and am excited by even being considered for national Murrow awards (to be decided out of the pool of regional winners.)

Links to the stories that made up each WRS winning entry:

A week in revolutionary Cairo

Business Insight: Transparency and Swiss banks of the future

Why UBS is not being fined in Switzerland

Streets of Cairo less secure, but still a comfort