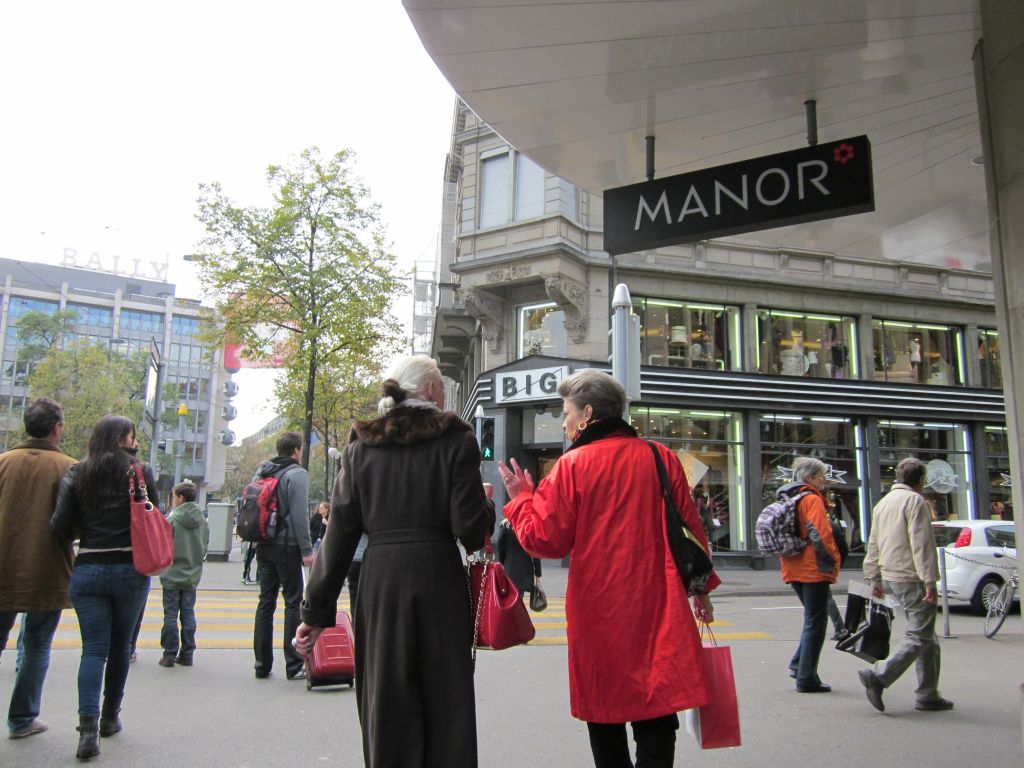 In Zurich there are two main streets, just minutes from each other but worlds apart. The Bahnhofstrasse is among the world’s most expensive shopping miles. Langstrasse has battled a reputation as a haven for prostitution and crime. World Radio Switzerland’s Tony Ganzer brings us this report from each street, and tells how development could be changing Zurich’s famous neighborhoods.

And then, he takes a look back into the history of each street and how it reflects a dichotomy in Zurich, even today.

It really is true that a few minutes can take a person to another world. Take Bahnhofstrasse for example.

The street begins here at the main train station, erupting from a grand archway into a broad street lined with pedestrians and trees.

“The street has a reputation to be a very good street. If you walk through you may realize that the most expensive stores are more toward the lake,” he adds. “And from the railway station you also have more shops also for young people, not as high a price level.”

The street is packed with department stores or niche clothing stores. Every few meters there is another shop with high-priced watches lining its windows.

And high priced candies from the quintessentially Swiss shop Sprüngli.

But if you head to the other side of the train station, it’s a different Zurich.

“This used to be a terrible corner, but it is getting brighter every day,” says Susanne Seiler, who owns a café and boarding house near Langstrasse.

“Langstrasse has a terrible reputation, and I guess it has to do with the prostitution. The barracks are up the street here, so there were comfort women here,” she says.

Seiler has lived in this neighborhood for 13 years, and says there have been problems here. She says drunks, drug-dealers and prostitutes have been regular fixtures on Langstrasse.

“When I first came..this green house was full of prostitutes,” she says, pointing, and referencing a nearby house. “There were 40 rooms in there, and let’s say in 36 of them there were prostitutes.”

Seiler says the neighborhood has slowly been recovering from its seedy past. Residents are investing again in renovating buildings. Students and artists are creating a different atmosphere. International grocers, clothing stores, even a school, are pushing Langstrasse away from its bad reputation.

“With all these young people coming over here just to have a good time and everything, the seediness is disappearing. The seediness also comes just from the places being old, and not much money being pumped into it maybe,” Seiler says. “But all this is slowly but surely changing, because like I say, it’s so central, how could they not want it, and do something with it?”

The two famous or infamous streets of Zurich have held their reputations for decades, but things could be changing. Hundreds of millions of francs are being spent on a new development project around the train station, which could bridge the gap between the streets; a gap deeply rooted in Zurich’s history.

Bahnhofstrasse now almost embodies the essence of luxury shopping. Shops offer watches for 5, 20, 40,000 francs in windows displaying the latest in high fashion. But it wasn’t always so.

“When the street was founded, as a street, it was a so-called…Fröschengraben…[for] frogs,” explains Hünig. “And then the first hotels were incorporated, and the railway was brought to Zürich with the station where it is now. And then they thought ‘we should have a street between that railway station and the hotels..’ and they thought of Paris, with the boulevards, and they tried to do the Bahnhofstrasse.”

“When the street was built in the 1860s it was mainly thought to connect the new main train station to the port on the lake side,” says Daniel Kurz, a city historian. “Langstrasse is absolutely on the opposite of Bahnhofstrasse. It is the district behind the main station, which in Zürich means it is also sort of a harbor district, with all the things of accompanying a harbor district, including prostitutes, but also including immigrants.”

Kurz says Langstrasse and Bahnhofstrasse have always developed differently. Commercial business focused on the road near the train station toward the lake, while blue collar workers and immigrants stayed in the lower income neighborhood.

The two worlds, so to say, were separated by the railway, and the Sihl river.

“Langstrasse was also the place where the demonstrations would take place, and very often in earlier times, people used to feel that the district to the left of the Sihl river, being the working class district, was very different from the city,” Kurz says. “So when a demonstration crossed the bridges from Langstrasse to Bahnhofstrasse, this very often meant police intervention or other sorts of trouble, because it meant transgressing symbolic borders.”

Kurz says Langstrasse was a main hub in developing Switzerland’s labor movement, with Vladimir Lenin even spending time there. But with a river, and army barracks isolating the neighborhood, the situation declined.

Rolf Vieli is known as Mr. Langstrasse. He’s a community activist, who grew up in the neighborhood. He says it used to be a classic blue collar neighborhood, but prostitution came in the 1970s with liberalization of sex laws.

The neighborhood always had a reputation for opposition, or encouraging revolutionary thoughts, he says.

But according to historian Daniel Kurz, reputations are not always deserved.

“I remember reading in a memoirs of a Jewish activist of the 1930s, Regina Kägi-Fuchsmann, who says, in her youth before WWI, she would never set foot into that neighborhood because she was sure it was full of revolutionaries with guns and bombs,” he says. “Those prejudices have always been alive and have never been true.”

Even with projects to bring more business and lower rents to Langstrasse some residents are resistant. They say the street has a unique character, and history, and they don’t want to lose that.