The best way to find out how people think about certain things is to talk to them, and listen. That may seem self-evident, especially when coming from a journalist, but it’s not.  One of the casualties of the technology race to social media is the ability to read someone’s presentation of themselves and believe you now know their perspective.  You don’t. Skimming a Twitter feed or Facebook page gives you nothing more than a snapshot of a moment in that person’s life.  If you want to better understand a person’s perspective, you need to connect in a different way.

I don’t want to move, it ain’t about moving.  It’s about change—trying to change it, so I won’t be a drive-by incident.

— Ms. Kim Benefield in the ‘Our Land’ radio special

Cleveland has been mentioned among cities like Ferguson, Baltimore, and New York, in the national soul-searching over police-community relations.  Heated debates and efforts toward police reform have been spurred by cases like the police shooting of 12-year-old Tamir Rice who had a pellet gun; the death in police custody of Tanisha Anderson who was suffering from mental illness; and the verdict of Patrolman Michael Brelo for firing the final 15 of 137 shots fired by police at a car after a high-speed chase; among others.

The Department of Justice, separately, found Cleveland police in the past to have exhibited a pattern or practice of excessive use of force, leading to a consent decree dictating reforms.  The mayor has mentioned that the Division of Police was already modifying its procedures before the agreement, so the process will now have added elements and oversight.

Cleveland had seen a number of protests, legal actions, rallies, funerals, and memorials in the wake of the cases mentioned above, and many that I didn’t mention.  By-and-large the gatherings were always peaceful–emotional and passionate, but largely peaceful.  Local and state officials had launched various listening tours to talk to the public about community-police relations, which also drew passionate testimony, but I didn’t feel satisfied as a journalist.  I had heard many soundbites, but I hadn’t often been able to listen to various stakeholders at-length.  I began to wonder if there was a way to speak about many of the cases, issues, concerns, hopes, and fears that Clevelanders were feeling, while still giving a space to explore some of those issues more deeply than to which we’re accustomed.

This is how the Our Land series was born: through a desire to listen longer to more people, all kinds of people, about their views on Cleveland’s police, neighborhoods, and future.

In any project you need to narrow your focus, and that’s what I did with my editors.  Our public radio DNA naturally pushes us toward bigger picture projects, with a community service focus.  Because interviews about police can go in so many directions–and they did–it was important to have a common starting point for each interview.  We settled on two questions: what should ‘community policing’ look like in your view, and how far are we from that ideal?

As the series took off, starting in the Cudell neighborhood where Tamir Rice was shot, continuing to the police commander who oversees community policing, and ending up in a public housing development with many, many perspectives, the project was clearly no longer just about community policing.  From the very first interviews, I heard concerns about community-police relations, sure, but also about neighborhood cohesion, economic development, gangs, perceptions of an ineffectual political process, and more.  A perceived uptick in violent crime, including a string of shootings which led to the deaths of a number of children, all influenced the series’ tone.

Cleveland is sometimes called “The Land” or various nicknames playing off “land,” like “Believeland.”  So in naming the series I wanted to emphasize a sense of community, first and foremost.  There are many opinions, many perspectives, but Clevelanders are all stakeholders in the future of Cleveland–our land.

The series included video elements, occupied an episode of The Sound of Ideas call-in show, and connected the views of many kinds of Clevelanders with each other.  I might hear one thing from a writer, and pose the question to a police commander, or ask a local pastor to comment on it all.  And throughout the process the conversations were authentic, respectful, and I believe incredibly relevant and valuable. 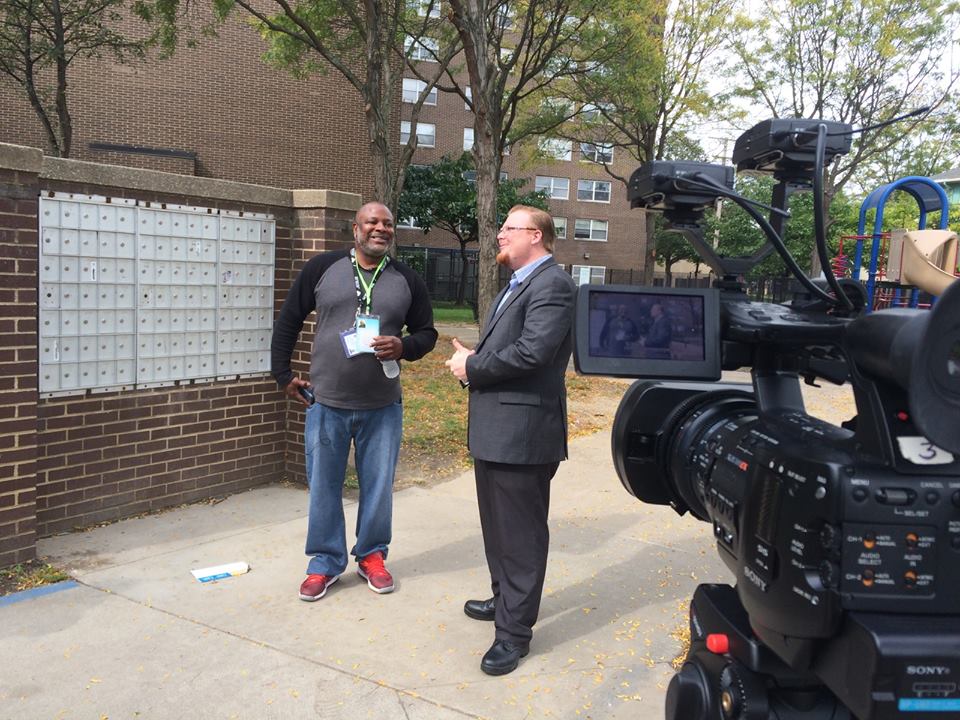 In my work as a journalist I’ve found ‘listening’ to be one of the most powerful tools in my toolbox.  Some journalists think they need to perfect the art of interrogation and accusatory questioning to gather powerful news material.  Those skills have a place.

But so many people I have encountered in various states of distress, or joy, or business, or whatever, just want to be listened to, understood, and have their perspective fairly and accurately conveyed.  It may sound like a given, but it’s not as present in modern journalism as it should be.  The times we are in with respect to the issue of community-police relations and many others, demand that we up our games.  As journalists we need to strive toward careful reporting and authentic depictions of our communities today.  And as readers, listeners, and viewers, we must demand higher quality journalism.

We cannot have a dialogue if we instantly turn-off or tune-out views that oppose ours.  I hope this series accomplishes at least that–that you don’t want to tune out if you hear something you don’t like.  Maybe you want to keep listening, to better understand where that person is coming from.  And maybe with that understanding, the path forward might be even a tiny bit easier.

Please consider listening to the series, or downloading on iTunes.