There is an understandable and appropriate silence about a graveyard.  The dead are meant to be left to their stillness.  Even outside of a superstition of what might happen if one “wakes the dead,” or that a cemetery may be “holy ground,” I feel there should be a reverence to the memory of the people buried beneath one’s feet.  In middle school, my English class took a field trip to an old cemetery near the rural-but-well-endowed California school house.  The assignment was to make a pencil etching of a gravestone of our choice, considering dates, names, comments left carved in moss-covered stone.  We would take our etchings back to the classroom and then write fiction based on the lives we conjured and assigned to these people resting beneath us. I vaguely remember penning something about “O. Henry,” a Civil War veteran who left behind his lover.  The curious thing about this exercise, as inspiring as it may have been to young fiction writers, is that the people buried in that cemetery were real; their lives were lived and paid in full.  One walks more carefully when one focuses on who the people were, and not who they are in a conjured world.

Yesterday I walked with my troupe around Saint Martin’s church in the local village in the French region of Picardie.  The church was constructed in the 12th century, and it, and its cemetery, are a long way from the glory days.

Editor’s note: more photos in a slideshow at the end of the article.

One cannot expect a church, or its cemetery, to remain in perfect order over the centuries, but it is still disconcerting to come across religious icons in pieces on the ground.  I don’t think one must necessarily be religious to feel that a crime has been committed when a crucifix, Buddha, or ancient text is destroyed by malice or time.  I am near certain the cemetery of Saint Martin was a victim of the latter, helped along by the waning of religion in modern France. 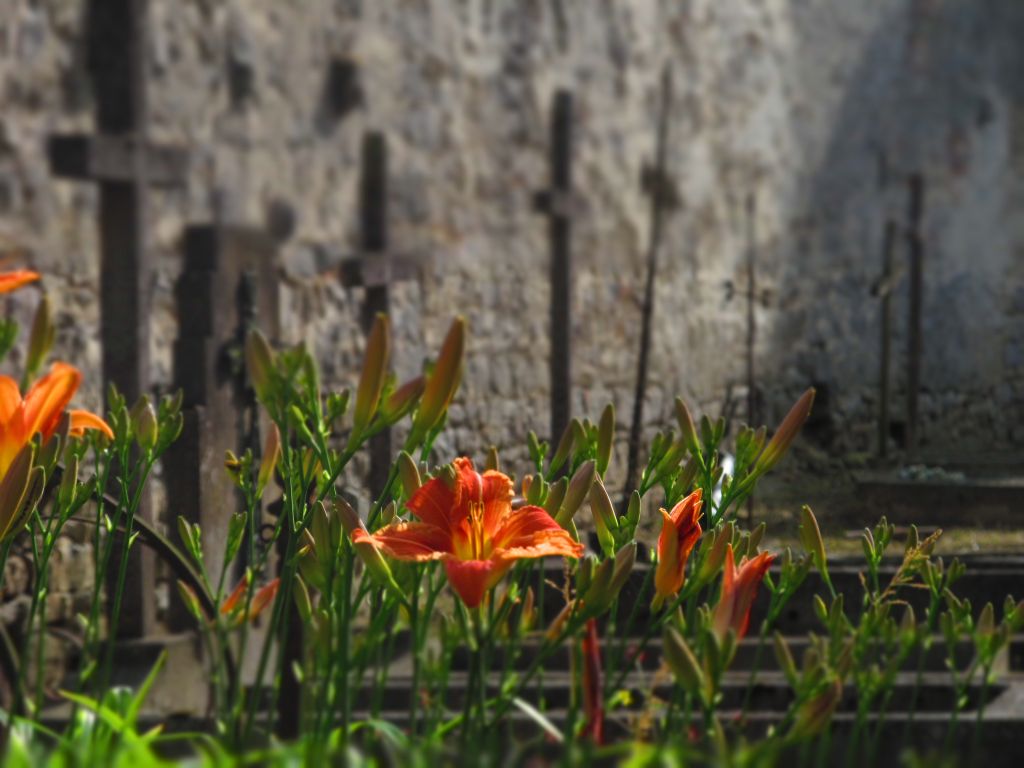 Lillies are the only colors in this cemetery aside some sunlight on broken glass.

While the Catholic Church played a strong part of French history, and is still afforded a special status in modern France, the country has turned decidedly secular.  The French subscribe to a kind of hyper secularism as a social “religion” called laicite, extreme separation of church and state.  This principle is often cited in cases involving a religious conflict in state institutions, like Muslim girls wearing headscarves in school. This, and general dissatisfaction or opposition to organized religion, has left many small parishes needing flesh and blood parishioners to revive a parish community.

Saint Martin’s is a prime example of this perpetuating cycle which leads to a church in disrepair.  A priest stops by twice a year* to celebrate mass, and the public enthusiasm is expectantly muted.  Still, the iron-framed grave markers look sadly and unnecessarily neglected around the church’s perimeter.  Some crucifixes are broken; the stone legs of a depiction of Jesus Christ sit disconcertingly on a pile of stone blocks.  Some stone markers have crumbled or faded.  Some wooden crosses are rotting away, but still stand above the remains of a person wanting to be remembered.

Even if there are logical reasons for a church or cemetery to fall into a sorry state, walking through that space once held dear is unsettling.  It is a house of God, yet its disrepair shows how little importance a community places on that house.  “It is just a building,” one might say, or “why should religious groups spend money on property when they can feed the poor?”  The physical church building can serve as a hub for feeding the poor, and act as a space for people to contemplate themselves, and God.  It also serves as a cultural marker, and an historical marker.  For some small towns, their churches are the best direct connection to the most important personal and community events of the last centuries.

Some townspeople here have launched a campaign to restore St. Martin’s, but it isn’t clear there is enough enthusiasm to raise the estimated €350,000.  I am not sure it is worth that money to restore a church and cemetery, but I do think the history of the people and place deserves to be preserved and remembered.

*An earlier version had this as twice a month, but it is in fact only twice a year!