If you take the DW bus line, or follow the DW road signs, it comes upon you like a whisper in darkness.  One moment you’re drowning the sound of noisy Mercedes, Audis, and VWs on Bonn’s busy Reutersstrasse, and the next moment you’re breezing under a canopy of helpful trees.  You can see the corner of a former government building.  But when Bonn lost its placing as Germany’s capitol, Deutsche Welle was drafted to fulfill the immense structure’s potential.

This is not London, but to tease the rest of this post I’ll borrow from Ed Murrow.  “This is Bonn, and there is ‘life’ going on.”

But let’s back up.  My journey from Washington wasn’t as easy as say a direct flight to Bonn.  My original flight had me through Newark, and I would be teamed with at least 3 other fellows.  That flight would take us to Berlin, and I would take the train to Bonn.  Thunderstorms closed much of the East Coast for the exact time of our flight.  A helpful gate agent transferred my ticket to a Lufthansa flight out of Washington, instead of Newark, to Frankfurt instead of Berlin.  I was set to go.  I called the other fellows to tell them to change flights–they hadn’t gone through security with me, and thus had to deal with ineffective ticket agents at the front of the airport.  Hours later, and just a short time before boarding, we all met at the gate.

As is my fortune on many flights, the gentlemen in front of me slammed his seat back as soon as the plane started its ascent.  I tried blocking it with my knees when he got up, but the sheer force could’ve left me legless.  I practiced German with the flight attendants, and noticed how they spoke in English to obvious or suspected Americans, and German to the others.  I answered in German, which the flight attendant told me later, made her think I was from Deutschland.

In Frankfurt we fellows gathered at passport control, and made it through without a word.  I hadn’t been issued my ticket for Frankfurt to Berlin yet, so I didn’t go through security with the rest of the group.  I rushed through the airport following signs, finally going through security with my old bording pass…no one checked.

After rushing to the gate, the place was mostly boarded, and the gate agent gave me a quick ticket and I sat in a good seat next to a pilot.  He told me the flight would be almost empty.  So I moved.  The fellows never arrived, and the plane took me to Berlin.  I was tired, and drifted in and out of sleep all through the flight.  It was the first day of a massive Lufthansa ground workers strike, making my departure a miracle in itself.

Outside the airport I tried buying a bus ticket from a machine, but it wouldn’t take my money, or card.  I headed to the window, and saw another fellow, who HAD gotten on the Newark flight.  He had just arrived too, but we parted ways almost right away.  I got my ticket, and headed to the train station.

Berlin’s Hauptbahnhof (main train station) with the famous radio tower in the background.

The bus was unbelievably packed, by far violated any and every law on the books in every country.  The bus driver was a cool looking beatnik with nothing to prove.  He liked the gas pedal though.  After a few lesser stops through a questionable part of town the bus parked quickly at the Hptbf.

My wife had bought me a first class ticket because it was cheaper than a second class.  It gave me access to a lounge with free coffee and other drinks and snacks.  The only problem with that ticket…nonrefundable.  My train was late, and I stood on the platform waiting for a train.  On the screen it said one location, and under it Koeln, my destination.  I thought that meant my train is the one after next.  Noooooo.  As I watched the first train pull away, and the screen changed to some far off land, I knew I was screwed.  I had to buy another ticket…second class was more expensive now, and I had another hour to wait.  I asked the attendant numerous times before boarding the next train, and finally was off.

Four or five hours of drifting in and out of sleep is fun, though not rewarding.  The woman next to me needed to go to Bonn as well, and asked me, in German, which train platform the connection was on.  Both our tickets said we arrived on platform 7 and boarded on platform 3.  Sadly, our train to Bonn was on the same platform as the one on which we arrived, and pulled away as we looked at our schedules again.  She was not amused and went for a smoke.

After a sweaty, non-air conditioned ride to Bonn, and a bus ride to my apartment, I had made it.  I started laundry, and checked e-mail before falling asleep.  The next morning I would start work, as soon as I was conscious.

Capitalism at its best.

Fortunately my walk to Deutsche Welle is moderately pleasant.  It takes a half an hour, and gives me a good workout everyday.  After walking through a roundabout, and down a side street, there’s a heavily vegetated pathway through an area of private gardens.  People own small plots of land and access their gardens through locked gates.  It’s very aromatic, and a nice view–aside the Mercedes building up ahead.

Every city has its problems. Unfortunately this one is visible.

At the end of the path is a stair case to walk over train tracks.  I actually fell off these stairs last week, twisting my ankle pretty well.  Ibuprofen and an ace bandage will hopefully speed things along.

Believe it or not, train tracks and the wires above are dangerous.

America’s gift to the world: the prefix Mc, standing for cheap. As an Irishman I don’t take offense.

Off the tracks I walk through the courtyard of the Mercedes building.  Part of it is occupied by a low-cost gym, which is always more or less moderately filled.

Once through there, I reach Reutersstrasse.  And it’s only another 15 minutes to Deutsche Welle.  This section of road is lined with museums, and the former Chancellor residence, along with a giant Konrad Adenaur head statue.  He looks a little like the Penguin from the original Batman series. Minus the monocle and hat of course.

DW is a massive complex, with catwalks and glass windows everywhere.  The lower deck has a full-service cafeteria, and then a smaller cantine for coffee and pie.  Because the building was not made for radio, the studios are everywhere–random studios crop up every few meters. 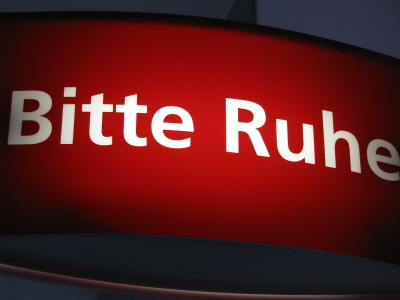 “Please Quiet” is much more tasteful than the four-letter demands for silence in the States.

In terms of realities which surprised me, Deutsche Welle is working to stave off budget crises like other networks, but it’s doing it in an interesting way.  Radio and Online will soon merge, presumably synergizing content and giving more exposure to what the other section is doing.  Also DW is mostly a rebroadcaster with its English service.  Though it has a few full-time reporters, many pieces are taking from other languages.

For example let’s say a Bosnian does a story for the German service, with sounds and interviews, etc.  An English producer can just take the sound, and cuts and translate it.  For attribution the lead says “…So and So reports from Bosnia, as presented by Tony Ganzer.”

I suppose it makes sense to use content as widely as possible, but I imagine in the States that would mean only using a cut or two out of the story, or making an anchor read piece.  Still, each organization has to find its own way of filling the minutes, and DW has to fill 30 languages at that.

With that I’ll tell a quick anecdote.  After asking around for a guitar to borrow, and asking if a pawn shop existed anywhere outside the US, I found a music shop in the main square in Bonn.  The Muensterplatz is near the Munster where Beethoven played organ until he was 20.  It’s a great building, with awesome artwork.  My favorite though was a simple, but detailed statue on the outside of the building wall.

The details of the face on this statue on the Muenster’s exterior caught my eye.

I had gone to the platz a few days before to see everything, and become reacclamated to the environment.  My wife and I stayed at a hotel just a few steps from the place, which I found, and we also had dinner with a college friend.  I used my best German and picked up some fresh fries from a Dutch fry chain restaurant.  I told them to hold the sauce, which is often mayo.

Eat with a little fork, and enjoy.

After finding one music store, and they only having terrible guitars for lots of money, I found another shop.  They had standard bad guitars for 150-160 euro.  I told myself if I could find a guitar comparable to my own for 150 euro I would buy it…call it a stress reliever.  Sure enough, I found my exact model of guitar, Ibanez PF series, for 149 euro.  It’s black, and plays well…the tone is brilliant and other features fit marvelously.  I’ll hopefully be able to make some euros as a street performer now.

In the next week I’ll be criss-crossing Southwest Germany for stories.  I have stops planned in Frankfurt, Ramstein military base, Stuttgart, and Bielefeld.  I will be very tired by the end, but I’ll hopefully have some quality stories.  And reporting is why I’m here, to show how good stories really are universal.