On a whim, we and a colleague wanted to hit the Funkturm (Radio tower) last week.

The Funkturm is one of Berlin’s well-known structures, and looks a little like a miniature Eiffel Tower….constructed of steel and exuding that 19th century vibe.  Unfortunately the tower was closed for renovation, but the regional public television headquarters was nearby.  So a little farther than the Haus des Rundfunks (House of Radio) we stumbled into the lobby of RBB (public broadcaster).

Climbing a staircase in a pretty sterile lobby we found radio equipment being exhibited.  Much of it was original–both in authenticity, and in the fact the equipment represented the most basic radio equipment ever to have existed.  It was on loan from the Technology Museum…and today we turned that piece of info into a field trip.

END_OF_DOCUMENT_TOKEN_TO_BE_REPLACED

It’s not obvious, but my current residence was once in British territory.  As all segments of Berlin were divided among the Allied (Alliierte) powers Schmargendorf just happens to be British.  The last real signs of that occupation stand as a small RAF base to our West, and a British-run radio station with terrible pop music.

But to the south of us, in Dahlem, was American territory, and in the former Allied Headquarters is a nice little museum documenting the interesting struggles for influence over Berlin.

END_OF_DOCUMENT_TOKEN_TO_BE_REPLACED 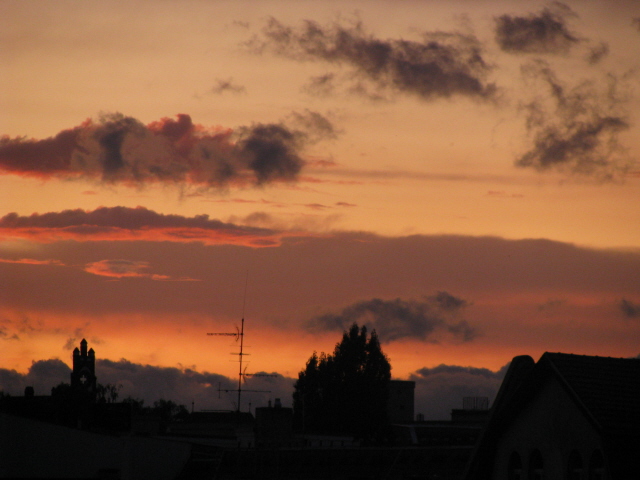 I remember an old Ziggy comic, in which round-headed Ziggy sits with his dog on a cliff’s edge admiring the sunset.  He remarks to his dog, “He does great work, doesn’t he?”  It’s a simple homage to a greater power, and the logic (or belief) behind it can be applied to most anything in life.  I remember and come back to that Ziggy wisdom occasionally because of its simplistic depth…an elementary understanding of something complicated, which to me makes perfect sense.

Now in Berlin, I am reenacting that Ziggy moment almost every night.  Our view of the horizon has brought unbelieveable sunsets into our life, which make for interesting Futter für die Seele. (Food for the Soul)

END_OF_DOCUMENT_TOKEN_TO_BE_REPLACED

It’s hard to understand how many little things go into successfully navigating life, until you’re forced to learn them over again.  Take the supermarket for example.  Over the years, one learns more or less the fair price for an item, where items are likely placed, and how to avoid collisions with other shoppers.  It’s just a matter of experience–when one does something for so long, the procedure becomes self-evident.

But when that experience has to be amended to fit into another culture, often we feel like fish in a new flavor of water.

END_OF_DOCUMENT_TOKEN_TO_BE_REPLACED 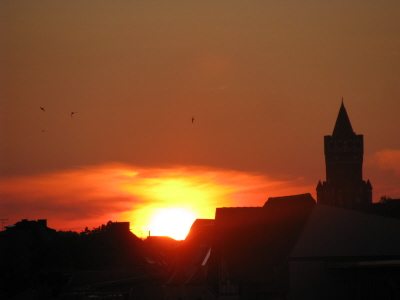 So far, Schmargendorf has treated us fine with its captivating views and convenient shopping layout.  With our ever improving German, we’ve navigated the worlds of finance, electronics, retail, postal services and public transportation with little trouble and few casualties.  And today brought my first full day of life in German.

END_OF_DOCUMENT_TOKEN_TO_BE_REPLACED

It may come as no surprise to those learned in the ways of babies, but our 3-month-old is growing.  His occasional smiles have turned into regular smiles, and his scattered coos have turned into a sort of talking, and laughing, and whining, and sharing.  Small things have become exciting for me–like describing all of the items in a grocery store, or narrating the curious characters who may cross our paths.

But these developmental events will be compounded by an even grander experience for our young one:  As of June 2, our family will be residents of Berlin, Germany!

END_OF_DOCUMENT_TOKEN_TO_BE_REPLACED

As a journalist, I'm sure many expect me to be a diehard advocate for the freedom of the press.  One may think, "Hey, he's a member of the press.  He should want to be free."  In most cases I do press hard for press freedom (at least in my thoughts–people don't often ask my opinion on the subject) if not solely because of the added life accountability can breathe into a society.  Just by publishing a story, or airing an interview, countless numbers of people from now until the end of digital records could possibly be influenced by the reported perspective of a newsmaker.

But perhaps you caught my "…In most cases…" caveat to an otherwise noble ideal.  The founding fathers (John Hancock being one of the first advocates) knew that a free society could not flourish in its freedom until the threats of sedition and treason were lifted from those printing *relative* truths.  (The first journalists printed some pretty terrible things.)  That noble beginning aside, I'm bothered by the occasional perversion of the First Amendment by the proud, the few, the Obnoxious Journalist Crowd.