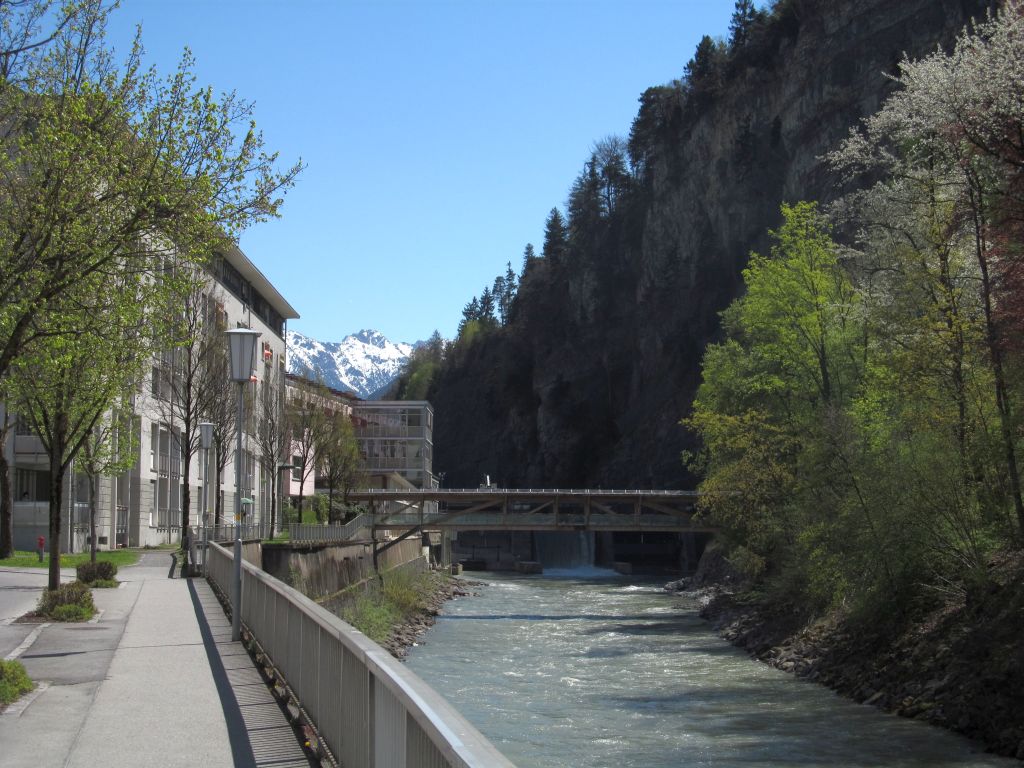 The Swiss-Austrian border has been a vital and emotional link between Switzerland and the outside world for centuries. Swiss and Austrian farmers in the Rhein Valley cooperated for many years, as did textile makers. During the second World War the border was a symbol of freedom for those trying to escape Nazi-occupied Austria…to mixed success.

And at one point in history, the Austrian border region of Vorarlberg considered becoming Swiss, even voting to pursue negotiations. To learn more about the region, WRS’s Tony Ganzer sends this audio postcard with Austrian historian Wolfgang Weber walking around the border town of Feldkirch.

We don’t perceive it as being a border because you drive over to Liechtenstein for your haircut, yeah? You go over to Switzerland to buy your chocolate, and on the same day—even on the same morning—you could go to Germany for a beer, for a Schneider-Weisse and a sauerkraut, and then you come back home and eat your Wienerschnitzel.

There was lots of cooperation over the decades between Switzerland and what nowadays in Austria. If you think: 700 years ago Swiss came over to rule Austria, that was the Hapsburg family. But there was also cooperation because within that Rhein Valley, where we are now, there was no need for a national border because everything was grouped around the Rhein, and families intermarried. And even during the second [World] War, where it was not allowed to travel into Switzerland, Austrian farmers who had their field at the Swiss side were allowed to go in.

The story about this piece of Austria joining the Swiss Confederation is very much based on economic reasons. Because after that first World War we had, Europe was starving, we had a big, big lack of food, and Switzerland as a neutral state within the war, it wasn’t the land of honey but it was a bit better.

The other one was also political, and the main political reason is: if you imagine in these days Europe was just being newly sorted, newly invented, yeah. The monarchies broke down, you had republics everywhere, and you also had the threat of communism.

There was a very serious debate about this part of Austria joining Switzerland, and it actually went so far that a referendum was hold. The actual question was: shall the local government pick up negotiations with the Swiss government if that region possibly joins that region or not? What has been transferred within history was this province had a big referendum on joining Switzerland, which is not true.

That never was realized because parallel to that referendum which took place in May 1919, you had the negotiations in Saint-Germain-en-Laye between Austria and the Allies and they decided Austria in the shape that was left after the loss of war had to be frozen in in a way, and that meant that the others decided that Austria exists out of these nine Länder which we know nowadays, where Vorarlberg and this Rhein Valley region is part of that, at that’s why that was it.

Coming back to the meaning of borders that can change, yeah: during the second World War, then the Swiss-Austrian border, or it was the Swiss-German border in these days, then that border became an icon even of the way in to freedom. And on the other side, on the Swiss side of the border, they said, ‘Oops. Wait, wait, what do we do with all these foreigners coming in?’ So that made that border very emotional on both sides. And you have many stories of Jews crossing the border being sent back; some stories about Austrian, German, Bulgarian soldiers who decided they didn’t want to be part of that war industry anymore; and that’s where this little region within in the center of Europe became a very Central European hot-spot during the World War Two.

This was the place where you could get into freedom, and that meaning is definitely gone.”