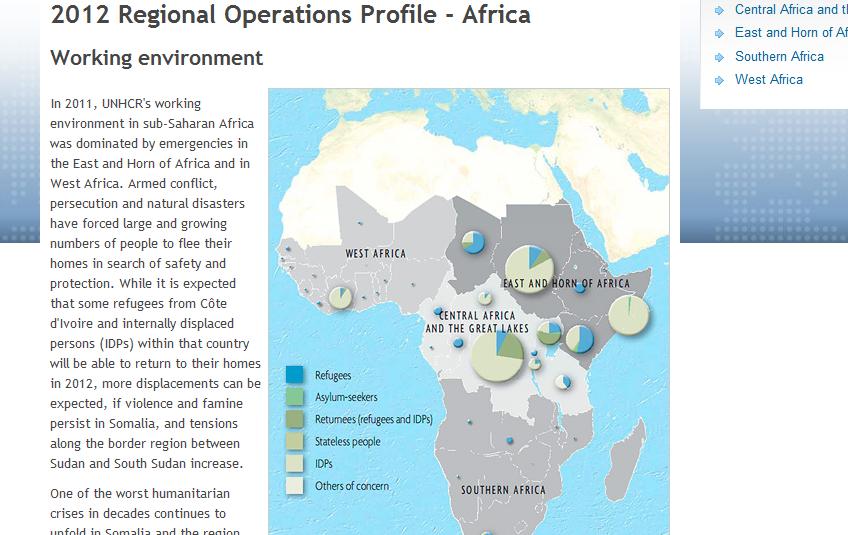 6 of October City is a suburb of sorts, or a satellite city from Cairo. It has 500,000 residents itself. But most of the 44,000 refugees helped by the UNHCR office here are scattered across Cairo.

KARMEN SAKHR: “So far, it’s not as bad as people would think it is after the revolution. Things are more going into order. There are some points that we still need to work more on: engaging the government more on what is happening in the Sinai and on the movement over there.”

Karmen Sakhr is the senior protection officer for the UNHCR’s Egypt office. She has only been in the job in this post for a few months, coming in after the Egyptian regime change and revolution.

SAKHR: “It was the first few months, I believe—again I was not here—but it was challenging. I have to say, though, that there was always cooperation with the authorities or the law enforcement, even though at times it was, it used to be stronger. Or at other times it would be weaker. Nevertheless, we still consider, and believe, that the primary entity that is in charge of protection of the persons of concern, and also providing protection to the UNHCR remains the Egyptian authorities.”

From this Egyptian vantage point the UNHCR has a number of situations it’s keeping an eye on. Trafficking through the dangerous Sinai region is one, but the bulk of refugees helped here are Sudanese, Iraqi, Somali, Eritrean. And since March of last year, the UNHCR and other agencies have been working at the Egyptian port city of Salloum, just over the border from Libya.

MOHAMED DAYRI: “The Salloum people have been somehow forgotten because of other crises: the Somalia crisis; recently the Syria crisis. Not withstanding the importance of the need to address those emergencies, and to come to help Somalis and Syrians.”

Mohamed Dayri is the Regional Representative for the UNHCR, based in Egypt.

DAYRI: “The tiny humanitarian space that we have got in Salloum is not an ideal one; far from it. We plead for better assistance and protection to these people with the government here. But the government says, ‘We have our own challenges here in Egypt. We cannot allow these people in. You have to resettle them.’ Not to mention that in Cairo we have others who are vulnerable who have to be assisted.”

Dayri says many refugees in Salloum are stranded, and the UNHCR is providing healthcare, food, water. It’s trying to confirm the legal status of the refugees for resettlement. Those efforts have been complemented by services from the International Committee of the Red Cross, and the Egyptian Red Crescent.

DAYRI: “The Egyptian revolution and what is being termed as being The Arab Spring has brought its own set of new challenges, and I must say that it has been quite tough on the staff morale sometimes. We face some security challenges, some security problems here in Cairo, sometimes in Salloum, also. So it’s not that easy, but we are trying to keep up with all of this.”

Dayri says the plan now is to switch to a livelihood strategy for refugees who end up in Cairo. Aid should shift from monthly stipends, to building refugee communities which can support themselves, he says.

If that happens, then refugees might be more self-reliant and have a life in Egypt.