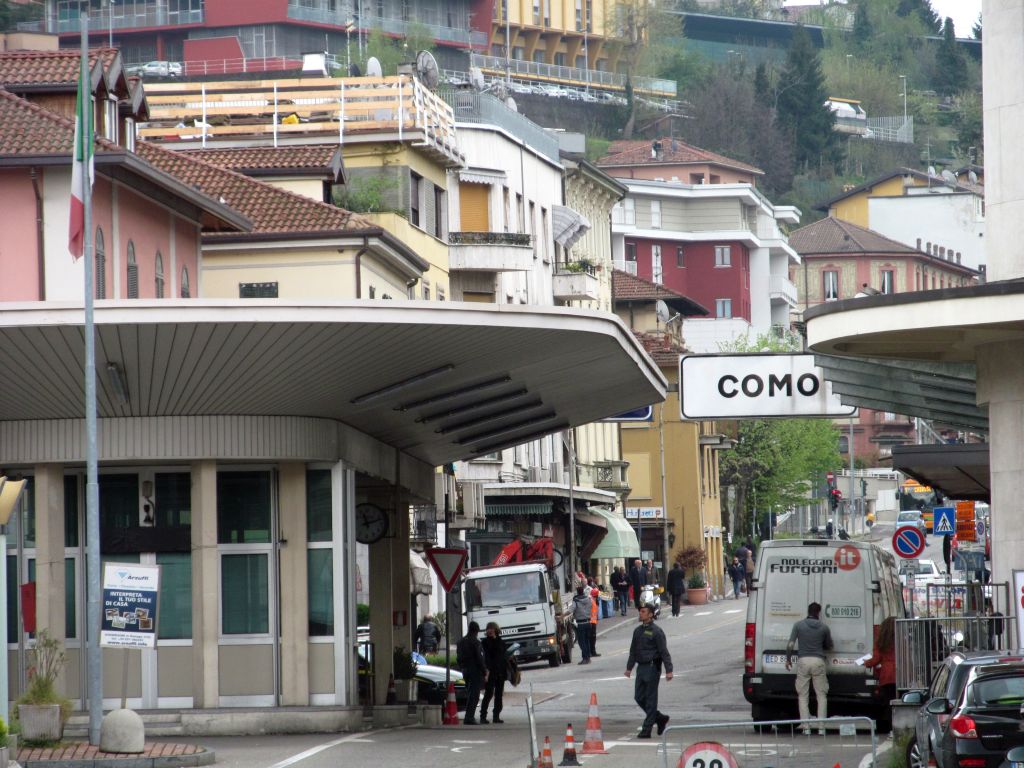 Chiasso is a the first stop in the canton of Ticino on the rail line from Italy. Like many border towns, Chiasso thrives on cross-border tourists, commuters, or shoppers. And occasionally there are smugglers there too, trying to bring back cash from a struggling euro zone economy.

Davide Bassi stands near a small border checkpoint at the southern edge of Chiasso.

The spokesman for Swiss border guards is one of many customs officials standing on the Swiss side, while Italian counterparts nearby are busy questioning and searching vehicles.

It’s a cloudy day, as a slight breeze powers Italian and Swiss flags, as most cars are waved through the multiple border lanes. Every once in a while on the Italian side, come stories of people who smuggle large amounts of a cash or perhaps a ton of gold in secret compartments in their car. This is noteworthy, but smuggling in general is nothing new for Chiasso and Switzerland.

“This kind of work is not so easy,” Bassi says. “The question is always the same: did you have anything to declare? With the answer we research to comprehend what happen. If these people it’s good people, if they tell me the truth, or something else. Then we begin to control about the things, about the value, about maybe they are criminal and we need the control to check the passport, the identity.”

It’s not the same in Italy, Bassi says, with different agencies and different priorities.

“The Guardia di Finanza they could check the things about the money, about the financial. And the police can do the control only about the document. And the Carabinieri do the things about immigration, for example,” Bassi explains. “And in Switzerland it’s something different. We have only a border guard. One man can do three different jobs.”

In Switzerland, the name ‘Chiasso’ often conjures ideas about asylum seekers moving north. But also, stories of smugglers hiding valuables and money on their way from Italy to Switzerland.

Swiss authorities have specific things they look for, however.

“We have three important items we are looking for: it’s the security of the people. Second one is the immigration. Last one is the products coming in Switzerland: the meat, alcohol, something to eat, something to drink, these kind of things,” Bassi says.

“About the money we don’t have any limit, we can bring in Switzerland what we want. But it’s clear that we, like border guard, we must be sure these people are normal people not criminal or something else.”

Switzerland has no limits on what you can bring in, or bring out in terms of an amount of money, I ask Bassi to confirm.

“Yes, in my opinion at the end the problem is not the money, it’s the people who are bringing this money,” he says.

In the past, Swiss and Italians may have to cross the border for their favorite goods.

“We have the possibility to buy the same things like in Italy also at the same price. That means that now we have fewer people that are just crossing the border to go to Italy to buy one liter of wine—it’s not so interesting,” Bassi says.

“In my experience I think that many Swiss people don’t know exactly what we do every day, 365 days each year on the street,” Bassi says finally.

“We don’t do only the check about the things, about alcohol or meat, but we check the people. And at the end our job is really a filter for different things and people that come into Switzerland maybe to do something wrong.”