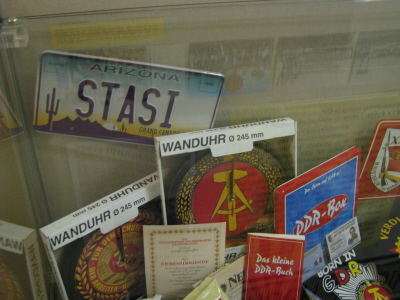 If you only spend time in West Germany the realities of this country’s history are often, I find, civilized.  The West has benefitted greatly by economic development and infusion of capital–being part of the global dialogue.  But once you step East, into the former DDR, history hits you in the face before you step off the train.  Buildings still looked bombed out, the road signs to “Moskau” seem terribly unfair, and to an American, there’s still an unsettled air of oppression.

From train windows you see shells of buildings–brick frames with darkened tops and glass-less window panes.  It’s hard to tell if that condition was still remnant from the World War, or just communist neglect for so long.  The DDR (German ‘Democratic’ Republic) is still known as a place with horrible pollution and air quality, leading many buildings and people to be stained over time.

I arrived from Bonn in the afternoon, and dropped my bags at an interestingly good Best Western near the train station.  This trip was an official get together of Burns Fellows, to debrief the experience so far, and to be shown East Germany with help of Frank Freiling, the all-star coordinator for Burns from Internationale Journalisten Programme.  He works for German broadcaster ZDF as his day job, and works on countless boards of organizations for the other time.

Our tour began with a look at the DDR’s history at an exhibition in town.  Through photos and original pieces, the museum documented East and West Germany after WW2, and then concentrated on East German history following the agreed boundaries by Churchill, Roosevelt, and Stalin.  From pop culture, to controlling dissent, the experience of seeing East German history was a strangely patriotic one for me.  Coming from a nation so liberty-focused, seeing stifled liberty was just that…stifling.

After that museum we visited the former headquarters for the Stasi in Leipzig, and saw surveillance pieces, cells, and learned about the movement that ultimately ended the Stasi, publically. The movement began at a local church as a prayer for peace, and climaxed as a 350,000 person march to Stasi headquarters…a fascinating and provocative move.

We enjoyed a dinner with alumni that evening, and visited a club with cushions instead of chairs…think giant couches you have to climb atop.  The next day we took a walking tour of the city, and spoke of our foreign correspondent experience thus far, before departing.

Leipzig is in a move to rebuild itself as a modern city now.  Unfortunately that means mostly malls and hotels–the amount of commercial development is staggering, and unsettling.  Shops are built around or on top of historical sites, to maximize space.  Ancient corridors are now ancient corridors with stores.  One person commented they have to build around these sites, because there’s not a lot of room, and everything is historical there.  I have a hard time with that.

Even if the U.S. continues to expand, and the amount of open space decreases, having a Starbucks and clothing shop on top of Gettysburg’s battlefield wouldn’t be okay.  At the same time, I wouldn’t be surprised if there’s a Starbucks there already.