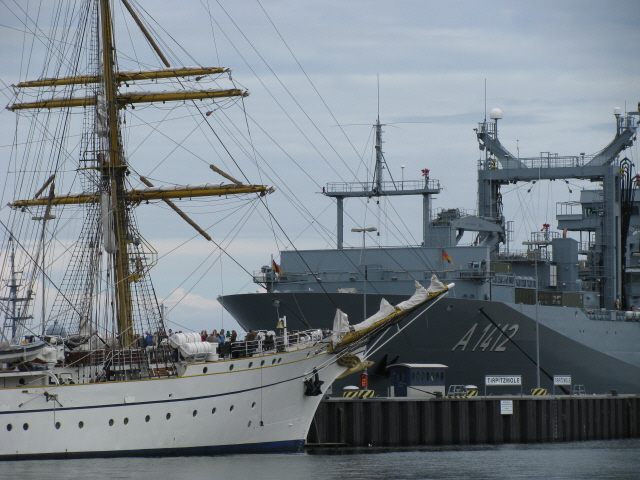 It’s a trip my wife and I considered for our “engagement journey” through Europe last year, but Kiel seemed too far out of the way.  As a northern port city, former refuge for pirates, the capitol of its region, and home to the annual Kielwoche sailing regatta, I thought its ocean air would suit me fine…and after a rain storm kept me inside to file a story my first day, I breathed deep for discovery on the next.

There’s a direct train from Bremen to Kiel, leaving at about 9am and stopping at numerous stations along the way.  I had been internetless in Bremen because of a miscommunication between me and my hotel’s Web site text….I thought wireless was included for guests, but it’s just “available for purchase” by guests.

My wife had found me the Hotel Wiking (Vee-king) in Kiel, which assured wireless access for guests was kostenlos, so I was eager to set up shop in a new town…and a respectable sailing city.  With directions in hand I left the train station and waited for the just-beginning rain to slow.  At a perceived break I headed down the street, only to be met with harder rain.  My jacket was soaked through almost immediately, as was my shirt underneath.  After the “1 km” to the hotel, I was sufficiently ready for a change of clothes and a meal.

At another perceived break in the rain I headed to a local market for food and hopefully an umbrella…food was available, but no umbrella.  My second set of clothes was soaked through.

By morning I had one pair of pants wearable, and I set out for a nice walk.  I ended up walking 5 miles (not kilometers) up the harbor, and then 5 miles back to my hotel, seeing plenty of sailing vessels, monuments, tourists and locals.

Kiel’s history as the site for Olympic sailing events was only a sliver of the fascinating occurences here, including numerous power changes over hundreds of years with Vikings and others, and its eventual fall from economic power as commerce moved from the Hanseatic practices of yore.  I’m glad to have visited.