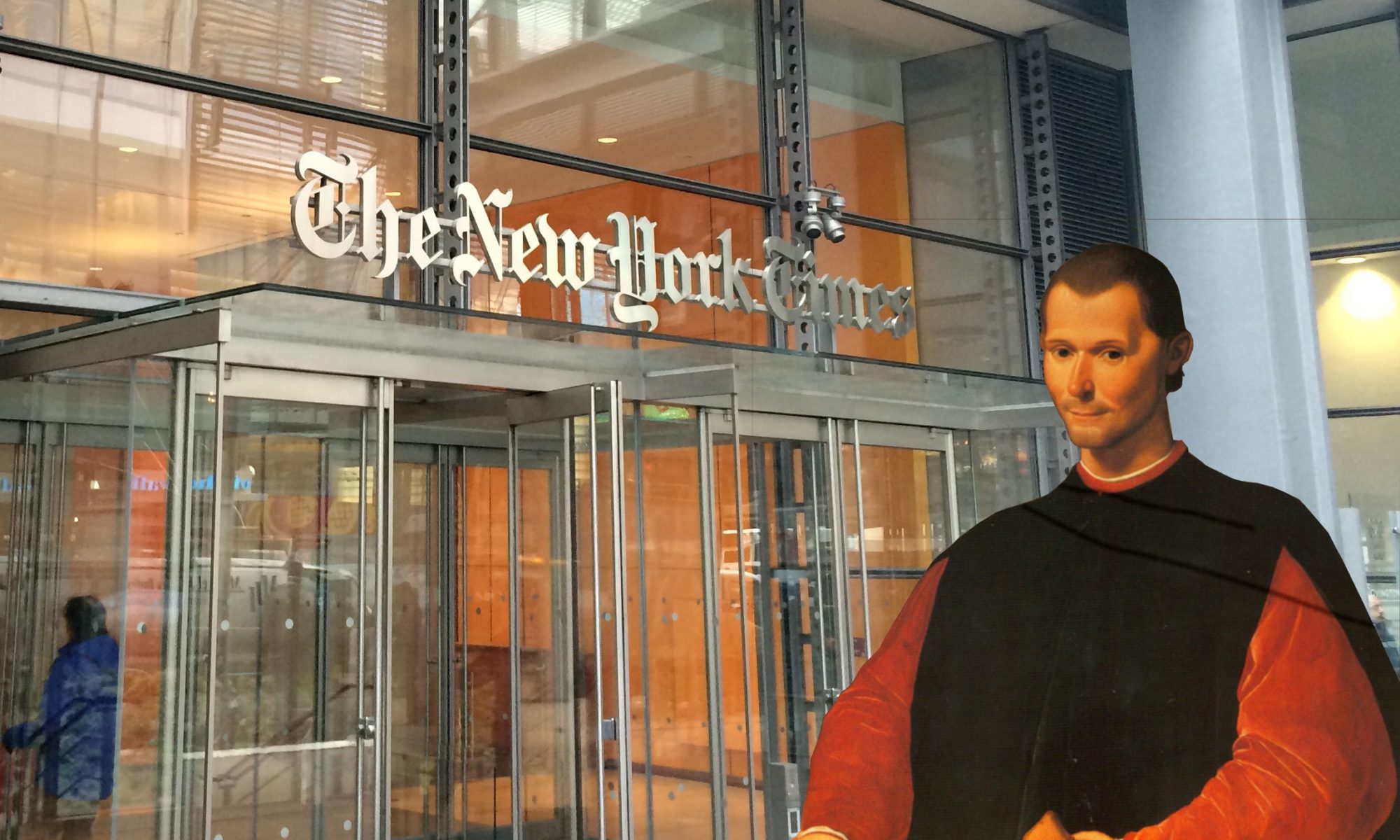 As Niccolo Machiavelli wrote by candlelight about power and people, his bed chamber was spared endless push alerts of ultime notizie (breaking news.)

His estate outside Florence in 1520 remained unsullied by the eternal wails of pundits and sound bytes which seem to drive our modern conversations and musings.

Machiavelli had his own form of media and matter to consume to be sure, but I have to imagine The Prince may have had another chapter or two if Fox News or MSNBC followed the machinations of Renaissance politicking as thoroughly as our world now.

Even without those chapters, Machiavelli’s recognition of what it takes to find and keep power may teach us something amid heated skirmishes in the modern ‘War on Media.’

Assaults on the Fourth Estate may not equate to the feuding principalities of Italy’s past, but what if we think about it as such, just for a moment?

Power to the people, right on

Machiavelli’s reputation has taken hits over the centuries, and many scholars say it’s undeserved. He was a diplomat, a student of politics in his time, and an analyst of power’s influence and reach.

But there’s a good chance his name in your head conjures thoughts of being ruthless in preserving and amassing power, but playing it cool.

Machiavelli’s observations in The Prince have applied to political maneuvering in seemingly every age, because at their core they‘re about human nature in cut-throat (sometimes literally!) power dynamics.

Take a line on optics and political imaging:

“Everyone sees what you appear to be, few really know what you are.”

In another line echoing today, he said hatred breeds conspiracies, but a conspirator lacking popular support:

“…has the people for an enemy, and thus cannot hope for any escape.”

Time and time again Machiavelli warns against losing the people, because rule and influence rest on whether it’s popular support or suspicion forming the threads holding Damocles’ sword.

“The best possible fortress is not to be hated by the people.”

There are many historical instances of treating the press as an ‘enemy of the people,’ but the escalating political rhetoric in our modern ‘War on Media’ set my mind to Machiavelli right away.

For people in power, their position is safer if they have control over as much as possible.

The labels of friend or foe.

“A wise prince should establish himself on that which is in his own control and not that of others.”

Machiavelli said that people (we) are fickle, ungrateful, and false, so keeping power rests largely in controlling as much of a situation as possible.

Relying on fate or luck is a fool’s errand.

And a free press is a dangerous variable in a quest to maximize political power.

A free press has immense power in a society, because it’s an unrestrained and committed advocate for a just and efficient society.

Or at least it has the potential to fill that role.

The press can’t fine someone.

The press can’t legally sanction someone in a court.

The press can’t imprison someone.

But the press can ask questions, and frame situations for the public; wrest control of the public conversation away from a nervous ‘prince.’

It’s the public, and institutions formed by and serving them, that mete out punishment sometimes based on reporting.

But the press can only inform.

Partisan pollution and digital diffusion have reworked the mediascape to allow for niche outlets to gain traction faster than was once possible.

As I’ve noted, there is no monolithic ‘media’ acting with one brain and motivation. I understand, this may seem to not be true given that many media organizations seem to follow the same stories, narratives, and people day-in and day-out.

But I think this is typically because these organizations are targeting certain advertisers and audience, rather that pushing a centrally-defined agenda. (Though the “must-run” commentaries from Sinclair do raise eyebrows.)

Still, the public generally understands the press to be a servant to society, and it’s in the interest of ‘princes’ hungry to keep power to undermine that covenant.

Love it or hate it

One of the oft-repeated maxims of Machiavelli is that for a leader it is better to be feared than loved. Gratitude doesn’t safeguard power as effectively as if a leader strikes terror.

Machiavelli though prefaced that section by saying if there’s an option, try to be both loved and feared.

But most importantly, in my view:

“A prince aught to inspire fear in such a way that, if he does not win love, he avoids hatred.”

This is meant to act as an observation for politicians, but what if it can be turned into a tactic?

What if demonizing the free press, and stoking hatred of it, are efforts to undermine that covenant with the public?

If the press isn’t trusted, then its information and analysis aren’t influencing the public or institutions as intended.

Power can be better consolidated without the scrutiny; more of the situation can be controlled.

What if the press itself is being Machiavellian, and it’s brought this war on itself?

Some years ago a book called The Princely Press imagined Machiavelli in a interview about American journalism.

The Fake Machiavelli talks mostly about journalists who may be seeking individual glory, and might adopt unethical tactics to get scoops and fame.

The means are less important than the end, in Machiavelli’s world.

The press “must not permit itself to be weakened by those in the public who call for a more democratic, community-minded, and socially responsible media system,” Fake Machiavelli said. “The press must assume its princely status.”

There are journalists and information agents (as I call them) who are serving themselves more than the public, and use any means necessary to get a scoop which will get them glory.

The visibility of people like that may be greater in the digital age, but there numbers are incredibly small among the ranks of common journalists.

And I think ruthless behavior among journalists to get a story, actually undermines the place of true power for the press, as I said before: the ability to hold the trust, attention, and protection of the public.

The free press has power because the people (society) grant it.

Efforts to stir hatred of the press are meant to undermine the relationship between audience and journalists, and lessen the resources for and sting of reports meant to help us understand our communities and institutions better.

The press is not beyond reproach, and its failings should be addressed honestly in a measured way.

But the role of the free press is vital to a vibrant, informed, and functioning Democracy.

So amid bluster, aggression, and destructive language targeting ‘the media,’ I offer a final, cherry-picked quote from The Prince:

“Proceed in a temperate manner with prudence and humanity…”