I am proud to give some bitter-sweet news today:
my work for World 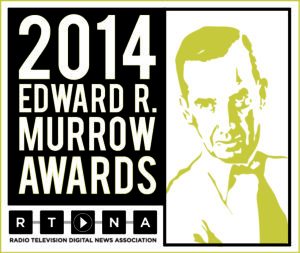 Radio Switzerland won the station three Edward R. Murrow awards from the RTDNA!  This is a huge honor.  It is bitter-sweet, though, because the WRS that won these awards is no more: the station was privatized in 2013, and now lives on as a privately-held, commercial, local station for the Lake Geneva region.  The news department which won these awards was disbanded along with the previous public service member WRS.

As I pointed out last year, when our work won an incredible five Murrows, World Radio Switzerland won in the international category, Region 14, for a small market station.  “Small market” is defined (under one description I found) as one serving an audience of fewer than 1.4 million people.  WRS’s main market is Geneva, served by FM, and has about 190,000 residents.  Before privatization, it also had listeners elsewhere in the country through digital radio.