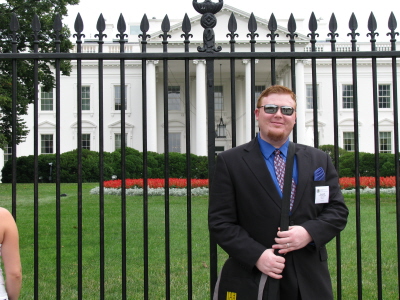 If you’ve been biting your nails waiting for the next installment of “In Search of Blue Water,” please don’t worry–it’s coming.  And the pictures of sea lions and gratuitous sailing vessels will be worth your time.  For now though, I must talk about more recent events.

The Arthur Burns Fellowship has had  be tied up and tired for a couple of weeks now.  A whirlwind orientation in Washington D.C. brought an unbelieveable amount of context to heading abroad.  Speakers, bankers, politicians, lawyers, and regular ole journalists all piled into the German Marshall Fund to help 20 journalists find their way to being foreign correspondents.

Days typically began at 7 or 8 in the morning, business attire, ready to work.  The sessions were intense and unforgiving.  We were prodded and taught by some of the greatest minds in transatlantic affairs, only to be prodded some more.  And between sessions at GMF, we 20 piled into an almost-Phoenix-appropriate, air-conditioned bus to meet experts on their home turf.

Even with an aura of cool, the Department of the Treasury spins with the rest of Washington.

Most notably was a talk with the Deputy Secretary of the Treasury who proved his merit as a politician.  Most answers about the housing crisis, investor confidence, and oil were stripped from the President’s speech last week.  But such is life.  We were allowed to question one of the most powerful financial officers of the USA, and that was a feat in itself.

That evening we escaped to the German Ambassador’s residence, allowing trustees, alums, and other notables to meet each other and see the future of foreign correspondents.  I was fortunate enough to meet some very important members of German media, as well as Bernd Debusmann.  He’s Reuters’ top world affairs commentator and I’ve seen his face countless times on the Reuter’s.com homepage.

Henry Kissinger was supposed to hang around, but I’m told he only stopped in for a moment, and then left.  I didn’t get to see him.

The U.S. Capitol…where so much (little) gets done.

We braved traffic in our air conditioned bus the next day for a meet with Senator Richard Lugar of the foreign relations committee.  Security was tight, but less so than an airport.  Still no liquids though.

This is as close to the Washington Monument as I could get on this trip. It was still kind of surreal seeing it standing in the distance.

Inside the capitol mostly lobbyists mulled around the halls like hungry gerbils waiting for more water.  (I thought that image was more fun than “sharks” or “wolves” because those predators have power.)  We were ushered by many handlers into a formal room, where the Senator would greet and meet with us. 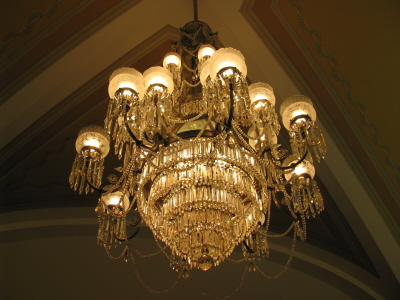 An impressive chandelier hangs in the Foreign Relations Committee room.
This is where they woo foreign dignitaries. And the walls are spy-proof.

The room was posh, and the talk was interesting but political.  Carefully worded insights, which may or may not be how things are–that’s our government.  Most the German journalists clammored more over a name plate than anything.  I’m not sure why. 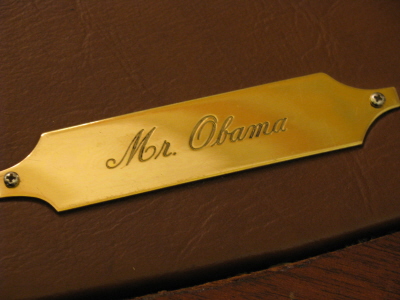 The Germans on our journey flocked to the nameplate of one senator. Never heard of him.

From there we had a few moments at the White House for pictures, before heading back on our journey for more speakers and context.  I think in 5 days I was introduced to everything from Kosovo to writedowns, sometimes in the same breath.  It’s big stuff.  It’s literally the information and vocations which build and tear down countries with pen strokes and strong words.

The White House, minus red-headed distractions.

For the weekend, we retreated to rural Virginia to enjoy a few days of “R and R.”  Those R’s equated more to trying to catch up on sleep, and breathing deeper than I had in the last days.  A wine reception, and final get together brought we fellows among each other a last time before we headed our separate ways.  My roommate through the orientation, Achim from Bayerischer Rundfunk, promised he wouldn’t cry.

For now, I’m in Bonn.  I’m learning a new audio system which is older than everything else I know, and I’m trying to plan smartly my trips for interviews.  Already I will visit the Lufthansa training center in Bremen to follow-up on another story I’ve done, and I may report on child neglect in Bremen as well, and why classes to educate parents are the state’s hope for defense.  But more details on Germany will need to come next time…the pictures will be worth it.