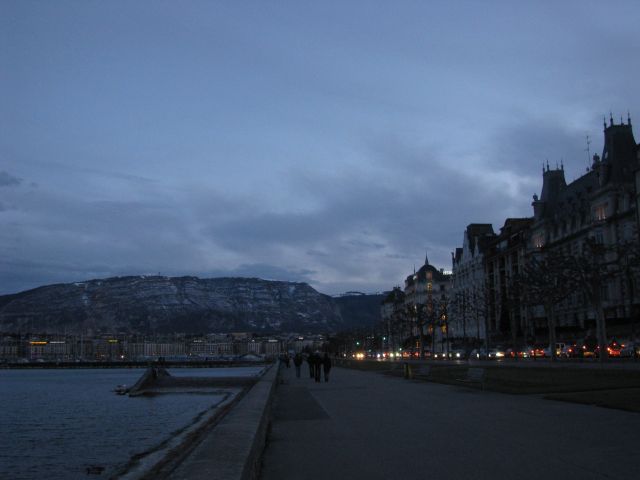 Editor’s Note:  After a brief hiatus here is another Audio Dispatch, this time from Geneva.  This series of sound-rich dispatches is intended to give a personal impression of European cities through the images and tones gathered during a walk down a street.

No matter what you call it: Lac Lemain, Genfer See, or just Lake Geneva…its inviting blue water is the first thing visible from both planes and trains entering Geneva’s outer limits.  Past the harbor, the sterile banking quarter is dwarfed by menacing cliffs.  This is the heart of French-speaking Switzerland, and a gritty melting pot of wealth and culture.  Here is my walk through the rainy streets of Geneva.

It takes about 3-hours to get to Geneva from Zurich, passing through the Swiss capital Bern, Fribourg, and Lausanne. The trains are modern and comfortable, but three hours is a long-time to sit, to read, to think, or to listen to other passengers.

I am not sure what language this man is speaking, maybe an African or island dialect.  Geneva is a hub of international activity.  The World Health Organization, International Committee of the Red Cross, the UN..attract a stream of cultures and nationalities to the southern banks of Lake Geneva.  Switzerland’s favorable policies toward asylum seekers have also brought a not-so-subtle dose of diversity to the Alpine confederacy.

Geneva is Switzerland’s second largest city with about 190-thousand residents.  Its place as the center of French-speaking Switzerland is proper—it is surrounded on three sides by France.  Many people commute to Geneva from cheaper homes in the surrounding French countryside.

The skies are darkened on this day…clouds tumble over the rock cliffs and begin to weep on the city’s narrow roadways.  Pizzerias and cafes have stacked their chairs under cover, and patrons  are wandering inside or back home.  Boulevard Carl Vogt has few pedestrians braving the rain.

Soccer fans with the red and white Swiss flag race through the streets celebrating Switzerland’s World Cup victory over Spain.  At a bus stop, crowds of people are wearing the Brazilian flag in various styles.  Most are residents of a nearby apartment building.

The River Rhȏne dissects Geneva.  Traffic and pedestrians overcome the waterway by different types of bridges—some of concrete, some of ornate metal.

Farther south a freight train speeds along its personal highway.

This foot bridge leads to a green space—trees, bushy and green, line the banks of the Rhȏne.  Birds sing while a steady rain continues to cleanse the city’s facade.  The big, paw-like, waxy leaves of one tree breaks the fall of raindrops heading toward Earth.

Cities often carry brands from human activity.  Litter or waste often line sidewalks blackened by the exhaust of thousands of vehicles.  Rain is supposed to neutralize those superficial brands.  Rain is supposed to wash away what need not be saved.  But when the storm ends, these streets are still gritty, and the sky still gray.

But in this brief pause in the storm the cacophony of engine and horn is dulled for a time by a purer sound…louder than the raindrops and with more joy, and innocence.  These are the sounds I long to hear on the Boulevard Carl Vogt or anywhere else.   And this is how I’ll end my time..on these European streets.

More information about the music used in this piece: